We need to talk about some information theory concepts that are important in machine learning. For illustration, in polynomial regression using least square estimation we already talk here, we define our error as “square error”

. In information theory point of view, we can define as an entropy for example, that is used in learning process of decision tree. Ok, let’s talk one by one those important concepts.

How to measure an information? Shannon propose well-known concept that is used until now, namely Shannon entropy. In short, we can say entropy is how many information units (such as bit) are needed to represent certain information or event. Or in more formal way, we can define as “the average amount of information produced by a probabilistic stochastic source of data”.

For example we have a tossing coin event with

, how many units of information we need to represent that event (random variable

)? We can measure it using this Shannon entropy as follows.

, which is same with binary system, we can say that the result above is in unit bit. So, to represent that tossing coin event, we need 1 bit. Next, what is another meaning behind this? See table below providing some samples of event 1, 2, and 3 whose outcomes are ternary with each probability value

Table above shows that the distribution which maximizes entropy is uniform distribution, which is event 1. And more variation the probability values, lower entropy it is, a.k.a less unit number (e.g: bit) we need to represent that event. It makes sense, if you know Huffman coding, event 3 will also have least average length of bit.

Let’s try to prove mathematically that uniform distribution is the distribution of probabilities that maximizes entropy.

will be maximal when

We can prove it using calculus of variation, but it will be relatively difficult. Another way to prove it is using Lagrange multiplier. In short, it is an optimization method to find maximal/minimal value subject to equality constraints. In this case, our constraint is

. By adding this constraint to our equation to be maximized, it will be as follows, and let it denoted by

just to make it easier to explain.

The second term is our equality constraint, and we have

, that is our Lagrange multiplier. And here, we change

to make the proofing easier, since the basis

in entropy is freely defined up to us.  We will take first differential w.r.t

, and make it equal to zero to get the extrema value. Here we go.

We change the integral to sigma (continuous to discrete) first, so that we can easily get the intuitive meaning during this proofing process. By proceeding the process, we get.

) because that is special case of Leibniz rule. Again, from

, in the first term, we use differential product rule

, we get Kronecker delta

. Thus, Kronecker delta will cancel out sigma summation and we get

And the last step, to get what

is, we can just re-plug 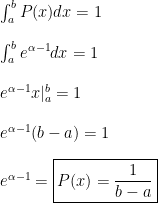 Voila! We just successfully proved that

(3) Given additional constrain, mean, what is the distribution maximizing entropy?

Let’s give additional constrain to our

Again, we will take the first differential w.r.t

, and make it equal to zero to find the extrema value. We already familiar to do functional differentiation (differentiate w.r.t a function) in the previous proofing, thus, we just skip the detail for later proofing. Here we go.

Next, we will find

to our two constraints. Here we go. 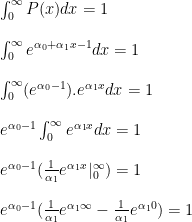 has to be negative. Thus:

We proceed to plug

to our second constraint.

We will use integral by parts (

) to solve equation above. Let

Re-plugging to our last equation, we get:

Again, equation above will be converged when

is negative, and as a consequence, the first term will be zero. Let’s continue to re-write again. 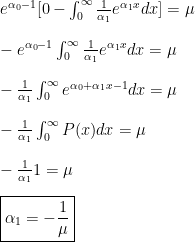 Yes, we almost get it! Our

according to what we already get before, in solving constraint 1. Thus, our

According to the final

we get, we can say that given additional constrain

(4) Given additional constrain again, variance, what is the distribution maximizing entropy?

We already derive with two constraints (sum of probability =1 and mean constraint), thus, by adding third term with our variance constraint, we will get as follows.

, we can use Jacobian and polar coordinate system. By doing that, we will get that the distribution that maximizes entropy in this case is Gaussian distribution. That’s why Gaussian is beautiful and important distribution. In later discussion, about online learning, we will encounter that conjugate of Gaussian is another Gaussian (self-conjugate). Interesting, right?

We already familiar with the term “conditional” in deriving Naive Bayes here. It’s similar in the entropy here. Conditional entropy is the amount of information needed to describe the outcome of a random variable given that the value of another random variable is known.

is defined as sum of

for each possible of

as the weights. Let’s write and derive it. 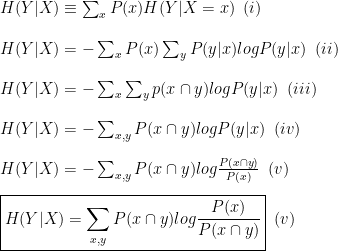 , we substitute using definition of entropy. From

, we use Bayes’ formula. From

, we also use Bayes’ formula.

Relative entropy, also called Kullback–Leibler divergence, is a measure of how one probability distribution diverges from the other one. Relative entropy

is defined as follows.

. Thus, for implementation, we can come up with:

2 thoughts on “Some Important Information Theory Concepts in Machine Learning”