This is a very simple distribution that describes one trial experiment with binary outcomes, for example tossing coin with head and tail result. We can write the probability as follows.

is a random variable mapping

Two equations above, we can write in one equation

An example of Bernoulli distribution is shown below.

and chance of resulting tail  (

Let’s us continue to derive the expected value (mean) and variance. 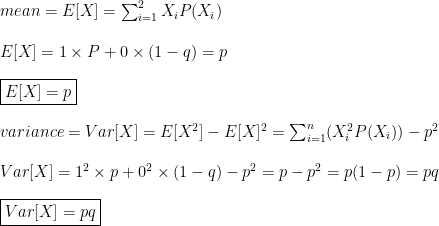 Now, let’s derive the MLE (Maximum Likelihood Estimation) of Bernoulli distribution. I will put the context first to get the intuition what the purpose of doing MLE in this case is. Let’s say, we will do

times trials, and we expect to get

trials. To do this, we can use MLE to maximize the likelihood of our trials to get

. Since Bernoulli distribution is independent and identical (i.i.d) in every trials, the probability of

is a joint probability which can be calculated by the product of all the probabilities in each trials. Thus,

We will transform it in

form, the multiplication becomes addition, which makes our equation simpler when taking first differential. In

We want to maximize

, and make it equal to zero to find the best 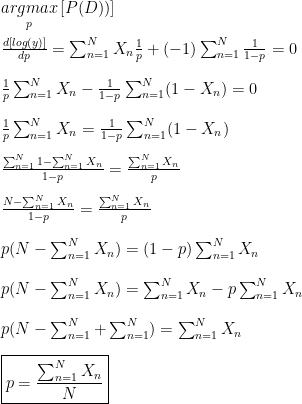 Binomial distribution is the general form of Bernoulli distribution that the trial is binary outcome as well. But, instead of doing 1 trial, here, we do

times trial. If we have

, thus, the probability for

times trial is as follows.

trial values. The axis x is

number, and the axis y is probability

We can see that for many

trial, it will be Bernoulli distribution like what we already discuss before.

Let’s derive the mean, variance and MLE (Maximum Likelihood Estimation). The mean of Binomial distribution can be derived as follows. 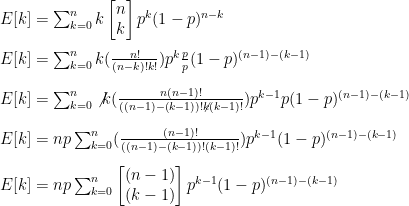 , we can re-write equation above becomes:

Again, in this case,

is number of head appears

Ok, let’s continue to derive the variance.
From Bernoulli process, we know that

. When we see Binomial process as a sequence of Bernoulli process, our

For MLE, in Binomial distribution case, we expect in

. To maximize the likelihood of what we expect, we can derive in similar way with what we already do in Bernoulli distribution before. Here we go.

is a constant value, it will be thrown when we take first differential. Thus:

The objective equation above is just exactly same with MLE in Bernoulli distribution we already do before. And we get

Mathematical formula for Beta distribution for

is gamma function, and

is a normalization constant to ensure that the total probability integrates to 1.

Why the input is only ranging