In the beginning of our article series, we already talk about how to derive polynomial regression using LSE (Linear Square Estimation) here. During this post, we will try to discuss linear regression from Bayesian point of view. Note that linear and polynomial regression here are similar in derivation, the difference is only in design matrix. You may check again our couple previous articles here and here.

Given data (green dots), we model

in pink line using Gaussian distribution, and our regression prediction is the mean of it (

), depicted using red line. To do regression toward given data, we can make formula below.

In this case, we can think that

is noise/bias error of our given data, so that we should consider it in our model. Thus, we will form a distribution (using Gaussian) for

meaning that we encourage the prediction to fit the given data.

We will model distribution of

). We can think that the distribution mean is

, which is located in the point whose Gaussian probability is maximal (remember: Gaussian distribution has max value in the mean axis). Thus, by maximizing the probability, we encourage our prediction to fit the given data. Note that the mean

is dependent variable of

, meaning that it will has its own value for different input

. Later, when we talk about “predictive distribution”, we will see that

actually is our output prediction.  As for variance

, we can think it is the variance of our bias in our data. To sum up, probability

is the prediction of

, and is a function of

, we will do MLE to maximize our likelihood

. Our likelihood will be:

To maximize the likelihood, we will take first differential w.r.t

and make it equals to zero.

. When maximizing the function, we will make the  first differential equals to zero. Thus, the constant will disappear in this case, whereas our

. Finally, we can prove these two equations to be maximized are same.

Up to this point, we successfully prove that linear regression using LSE equals to MLE in Bayesian method.

Let’s try to do MAP Bayesian maximizing the posterior probability in linear regression. Given

, we will try to estimate our regression parameter

For likelihood, again, it is univariate Gaussian just like when we did in MLE above.  As for prior, it is multivariate Gaussian, and we will use isotropic form (covariance matrix = scalar x identity matrix). We use precision scalar

(precision is equal to

) instead of variance or covariance matrix to make the derivation easier. Our prior in this case is our prior knowledge of how

is distributed. Ok, let’s proceed to the derivation. We will ignore marginal distribution since it’s only constant normalization.

To get the regression parameter

that maximizes posterior probability, we will take first differential w.r.t

and make it equals to zero. Here we go.

The last line of equation above is similar with our cost function in regression using LSE with regularization here, which is

Divide both side by

Since when maximizing we take first differential and make it equals to zero, thus, the constant value

will disappear. And finally, we have:

in this case corresponds to

, which is the regression parameter.

is just the matrix form of

After we can prove two things above, let’s proceed to derive the posterior

for online learning. The last result, we have:

For one pair input data in every iteration in online learning, we will have single likelihood probability. Or in another word, the summation in the likelihood above will disappear. In this case, our posterior becomes as follows.

To get update parameters mean and variance, we can do “completing the square” technique like what we already did in deriving Gaussian online learning here, since product of two Gaussian will produce another new Gaussian. Let our new Gaussian

Then, let’s do “completing the square” for the power term of both equations above by collecting those terms regarding coefficient of 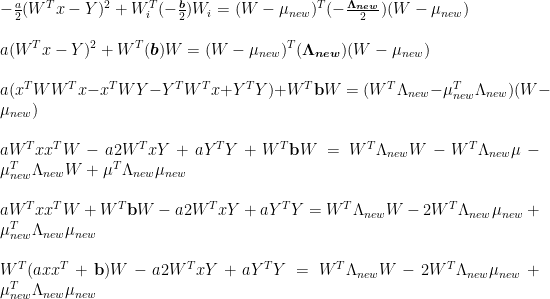 For equation above, in

coefficient, we can find our new precision matrix

For the clarity, let’s put the matrix form each of them. Just for example, when the polynomial order = 3. Thus: 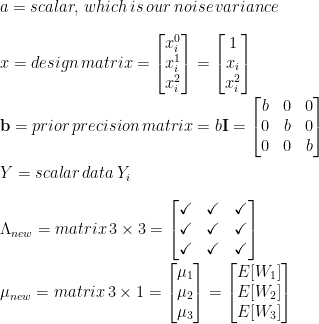 Form above is for one pair data

. For m-pairs data, we can use design matrix

Congratulation! Up to this point, we already get the parameters update of new mean and new precision matrix. By doing all derivations in this post, we also get the intuition how Bayesian method works, which is an important and potential framework in machine learning. FYI, some scientists are proud and believe that Bayesian framework will become powerful framework in machine learning that nowadays is dominated by deep learning. Maybe couple years later Bayesian will beat and replace deep learning? Or complement it? Let’s see 🙂

which uses prior knowledge

. A simple example, if we have tossing coin : sequence 1

, frequentist will argue that probability of T (tails) in sequence 2

, which only consider in that sequence, without considering prior (previous trials). Whereas, Bayesian will argue that the probability of T in sequence 2