in cartesian coordinate with respect to

in polar coordinate is:

Then, changing coordinate system from cartesian coordinate to polar coordinate, it can be done by this formula.

is the determinant of

Let’s do an example! See picture below.

To calculate the circle area, we can do as follows.

, let’s just skip the detail because we are already familiar with the circle area formula

We can calculate the circle area by using coordinate polar resulting exactly same with what we get above. See picture below.

In cartesian coordinate, we calculate by dividing the circle area into small box

, then sum all those small box area. This is relatively difficult since we have to determine the lower bound and upper bound of the intergral w.r.t

. Using polar coordinate system, we can convert our calculation by making small area shown in the picture above in the right parameterized by

See the result. We successfully calculate the circle area using polar coordinate easily where the final result is same with circle area formula we are familiar about.

Let’s put the condition first. We already know that the Gaussian distribution, closer to the original point (would be in 0,0 for zero mean case), bigger its value is. In two dimensions, the distribution is shown picture below.

Another characteristic we know is that the distribution is symmetric both in axis x and y. Using these assumptions, we will try to derive what is the mathematical formula of it. Again, we will use polar coordinate to make the derivation process easier. See picture below.

This is Gaussian distribution if we see from the top, and we put polar coordinate

. From the picture, we can calculate that

We know that in Gaussian distribution,

(distance from origin), and will have same value for any

is same. Thus, the left hand side will zero, and for the right hand side, we can use differential product rule.

, and using chain rule in differentation, we get:

In Gaussian distribution, this differential equation is true for any

are independent. This can only happen if the ratio defined by the differential equation is a constant. 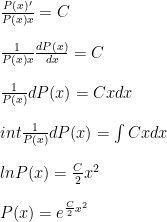 Since this is probability distribution function, thus, it sums to 1.

Because the distribution is symmetric, and

are independent, thus, we can modify as follows.

Let’s solve two those integrals using coordinate polar like we already did before.

bounds, we use from

in this case is

, like what we already calculate before. Proceeding our calculation, we get: 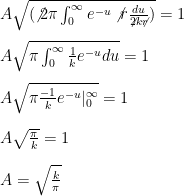 The last, to find

, we can use constraint

(for zero mean). We will use constraint variance

because it will be easier to derive. Here we go.

Next, we will solve equation above using integral by part ( 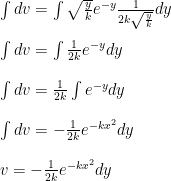 Let’s back to solve our integral by part.

We know from what we already get before that

Hooray! We already successfully calculate all we need in deriving Gaussian distribution. The last, we just plug 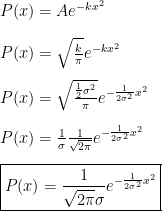 Equation above is for mean

, we can write as follows.

Up to this point, we already successfully derive Gaussian distribution function. Congratulation!

We will integralling simple Gaussian function

. In this case, we ignore first the constant

and use zero mean. Here we go. 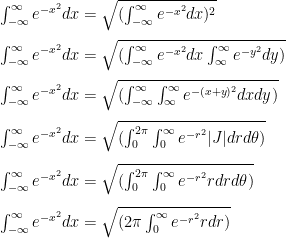 . Re-plug to our last equation, we get: 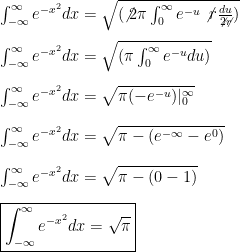 We’ve made it! We just successfully derived given Gaussian distribution.

Like we already did before in Bernoulli and Beta distribution here, we will also do MLE in this Gaussian distribution discussion. We will try to estimate mean (

) that maximizes the likelihood.

Let say we have trial result

that maximize the likelihood? Let’s do that.

The likelihood of Gaussian distribution is defined below.

To maximize this, as usual, we will take first differential and make it equal to zero. But, before it, to make it easier, let’s do in

that maximizes the likelihood of Gaussian distribution. To do this, again, we can take the first differential w.r.t

See. Equation above is exactly same with what we already know about calculating mean value. Next, we will try to calculate variance. To do this, we take the first differential w.r.t

Multiplying both side with

using formula we already derive via MLE in this post.

One thought on “Deriving Gaussian Distribution”